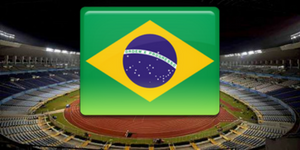 Brazil national football team are called Seleção Brasileira de Futebol in Portuguese language. Brazil are member of the CONMEBOL since 1916 and member of the FIFA since 1923. Brazil are nicknamed as Canarinho (Little Canary), Verde-Amarela (The Green and Yellow) and Seleção (The Squad). Brazil have triumphed in 1958, 1962, 1970, 1994 and 2002 editions of football world cup. Brazil have the best overall performance in the FIFA World Cup, with a record of 70 wins in 104 matches played.

Brazil have the fate of being the only national team who have claimed the World Cup title on four different continents. Brazil triumphed once in Europe (1958 Sweden), once in South America (1962 Chile), twice in North America (1970 Mexico and 1994 United States) and once in Asia (2002 Korea/Japan). Brazil are one of the four nations who have won the three most important men's football titles namely the FIFA World Cup, the FIFA Confederations Cup, and the Olympic Games.