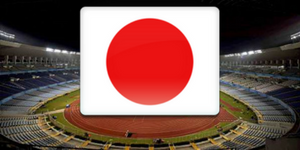 The Japan national football team represents Japan in association football and is operated by the Japan Football Association (JFA), the governing body for association football in Japan. The current head coach is Vahid Halilhodžić. Japan is one of the most successful teams in Asia, having qualified for the last six consecutive FIFA World Cups with second-round advancements in 2002 and 2010, and having won the AFC Asian Cup a record four times, in 1992, 2000, 2004 and 2011. The team has also finished second in the 2001 FIFA Confederations Cup. Their principal continental rivals are South Korea and most recently, Australia. Japan is the only team from outside the Americas to participate in the Copa América, having been invited in 1999 and 2011. Although they initially accepted the invitation for the 2011 tournament, the JFA later withdrew following the 2011 Tōhoku earthquake and tsunami. Grab your Japan World Cup tickets on XchangeTickets.com, your fan to fan online ticket exchange marketplace. Choose an event from the upcoming events under Japan World Cup to see the variety of tickets available. You are also very welcome to sell your spare Japan World Cup tickets on XchangeTickets.com, please be advised that listing and advertisig your Japan World Cup tickets is 100% free on XchangeTickets.com. All Japan World Cup tickets are fully protected by XchangeTickets.com's 100% Moneyback Guarantee!