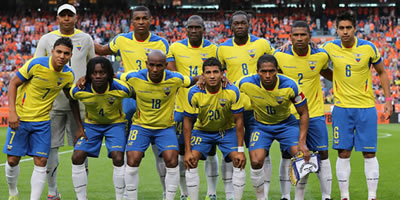 The Ecuadorian Football Federation is in charge of the men's national football squad, which competes internationally for Ecuador (FEF). They joined CONMEBOL in 1927 and FIFA in 1926.
Ecuador declined a request to take part in the first FIFA World Cup, which was held in Uruguay, and did not play in the competition until 2002. The qualifying campaign saw the rise of several players, including Agustn Delgado, Lex Aguinaga, Iván Hurtado, Ulises de la Cruz, and Iván Kaviedes, who would pave the way for Ecuador's successes in the following ten years after finishing ahead of Brazil and Uruguay in the standings. They were anticipated to perform at the 2007 Copa América after their successful 2006 World Cup run that saw them advance to the Round of 16, however they were ousted in the group stage. They haven't triumphed in the continental competition, like Venezuela. On home soil, La Tri's best results came in 1959 and 1993 when they finished fourth.

How do I buy Ecuador Football World Cup tickets?
For every game, Xchange Tickets will offer options to purchase Ecuador tickets. Use our live inventory to choose the number of tickets you want, the price you want to pay and the area in the stadium you want to sit. Xchange Tickets website will then give you the best and safest option from the online market. Once you purchase tickets, you will then be instantly sent confirmation and delivery details of the tickets. Many Ecuador Football World Cup tickets are now in the form of mobile tickets which you will be sent the details for.