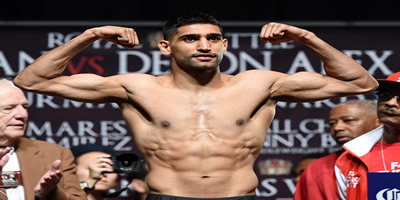 Amir Khan (Former champion) announces shock bout against Neeraj Goyat on July 12 in Saudi Arabia. Khan will represent Pakistan in an event against India. Amir Khan has announced a quick return to action following his defeat to Terence Crawford in April.
The 32-year-old will face Neeraj Goyat on July 12 at the King Abdullah Sports City in Jeddah, Saudi Arabia as part of an India vs Pakistan event at which he will represent Pakistan. Amir Khan is the king of unexpected fight announcements Goyat is a 11-3-2 (2 KOs) Indian boxer, well-known in his home country, but unknown outside of it.
Initial reports suggested the fight would be an exhibition, though this has not been specified in the announcement. Amir Khan said: “This is an exciting challenge that I have ahead of me. “It will be the first time a British Pakistani will fight an Indian boxer, which eventually will bring the two nations together.
“I would like to thank the Saudi government and General Sport Grab your Amir Khan tickets on XchangeTickets.com, your fan to fan online ticket exchange marketplace. Choose an event from the upcoming events under Amir Khan to see the variety of tickets available. You are also very welcome to sell your spare Amir Khan tickets on XchangeTickets.com, please be advised that listing and advertisig your Amir Khan tickets is 100% free on XchangeTickets.com. All Amir Khan tickets are fully protected by XchangeTickets.com's 100% Moneyback Guarantee!

Don't miss the high adrenaline action at The Super Boxing League. The Fight Night shall be packed with high adrenaline combat action where 20 renowned pugilists from the world of Pro Boxing shall compete in 6 Undercard Bouts (hard-hitting Knock Outs) and 4 Title Bouts.


The Four Title Fights of the Fight Night are as follows: