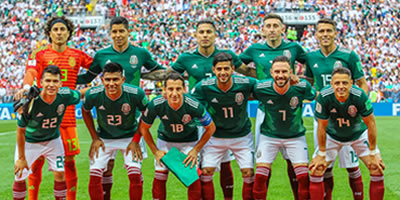 The Mexican Football Federation, known in Spanish as Federación Mexicana de Ftbol, is in charge of managing the Mexican national football team, known in English as the Selección de ftbol de México. It participates in CONCACAF competitions.
Mexico is one of just six nations to have qualified for seventeen World Cups and has done so continuously since 1994. Over the past seven World Cups, only Brazil and the Mexico national team have advanced past the group stage. On July 13, 1930, Mexico took on France in the opening game of the inaugural World Cup. The 1970 and 1986 World Cups, both of which were held in Mexico, marked Mexico's best World Cup advancements, with both of those tournaments ending in the quarterfinals.

How do I buy Mexico Football World Cup tickets?
For every game, Xchange Tickets will offer options to purchase Mexico tickets. Use our live inventory to choose the number of tickets you want, the price you want to pay and the area in the stadium you want to sit. Xchange Tickets website will then give you the best and safest option from the online market. Once you purchase tickets, you will then be instantly sent confirmation and delivery details of the tickets. Many Mexico Football World Cup tickets are now in the form of mobile tickets which you will be sent the details for.