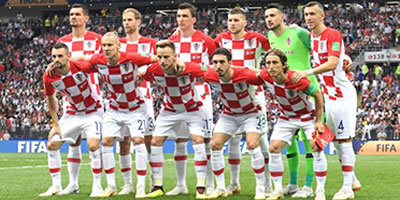 The Croatian Football Federation is in charge of the Hrvatska nogometna reprezentacija, the nation's football team that competes on the international stage for Croatia (HNS). Following the breakup of Yugoslavia, both FIFA and UEFA recognised the team. During times of political unrest, sides were active, defending independent states as the Independent State of Croatia from 1941 to 1944 or the Banovina of Croatia from 1939 to 1941.
Since 1994, the current team has participated in competitive games, beginning with the UEFA Euro 1996 qualifying round. They participated in the 1998 FIFA World Cup for the first time, placing third and producing Davor uker, the tournament's top scorer. Twenty years later, Croatia made it to the World Cup Final in 2018, where Luka Modri won the tournament's most valuable player award. They are among the newest national teams (since their inception) to make it to the round of 16 of a major competition and the newest side to be ranked in the top 10 of the FIFA World Rankings.

How do I buy Croatia Football World Cup tickets?
For every game, Xchange Tickets will offer options to purchase Croatia tickets. Use our live inventory to choose the number of tickets you want, the price you want to pay and the area in the stadium you want to sit. Xchange Tickets website will then give you the best and safest option from the online market. Once you purchase tickets, you will then be instantly sent confirmation and delivery details of the tickets. Many Croatia Football World Cup tickets are now in the form of mobile tickets which you will be sent the details for.