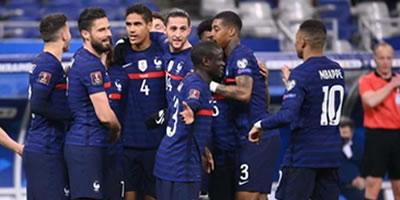 The French Football Federation, often known as the FFF, oversees the France national football team, also known as the Équipe de France de football, which represents France in men's international football. The coq gaulois is the team's emblem, and its colours are blue, white, and red. Les Bleus is a colloquial term for France (The Blues). They won the most recent World Cup final in 2018, making them the current world champions.
Didier Deschamps is the manager of France, who plays its home games at the Stade de France in Saint-Denis, Île-de-France. They have also won one CONMEBOL-UEFA Cup of Champions, one UEFA Nations League championship, two FIFA World Cups, two UEFA European Championships, and two FIFA Confederations Cups. The 1980s, the late 1990s/early 2000s, and the late 2010s were the three main periods of France's success, which led to a number of significant awards. One of the four European teams who competed in the 1930 World Cup was France. The team, headed by Raymond Kopa and Just Fontaine, came in third at the 1958 FIFA World Cup 28 years later.

How do I buy France Football World Cup tickets?
For every game, Xchange Tickets will offer options to purchase France tickets. Use our live inventory to choose the number of tickets you want, the price you want to pay and the area in the stadium you want to sit. Xchange Tickets website will then give you the best and safest option from the online market. Once you purchase tickets, you will then be instantly sent confirmation and delivery details of the tickets. Many France Football World Cup tickets are now in the form of mobile tickets which you will be sent the details for.