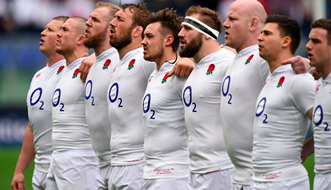 England have contested every Rugby World Cup since it began in 1987, reaching the final three times and winning in 2003.
In the inaugural tournament they finished second in their pool before losing to Wales in the quarter-finals. They again finished pool runners-up in 1991 but recovered to beat France in their quarter-final, and then Scotland in their semi-final, en route to a 12–6 final defeat to Australia.
In 1995, England topped their pool and defeated Australia 25–22 at the quarter-final stage before being beaten by the All Blacks in the semi-final. Their third-fourth place play-off match against France was lost 19–9.
The 1999 competition saw England again finish second in the pool stage. Though they proceeded to win a play-off game against Fiji, they went out of the tournament in the quarter-finals, losing 44–21 to South Africa.
In the 2003 tournament, England came top of their pool. They progressed to the final beating Wales and France in the quarter and semi-finals. England won the final with a drop goal in the last minute of extra time.
The 2007 defence of the cup in France got off to a very poor start, with a below par victory over the United States and a heavy 36–0 defeat to South Africa leaving the holders on the brink of elimination at the group stage. Improved performances against Samoa and Tonga saw England again reach the knockout stages as pool runners-up, before a surprise 12–10 defeat of Australia in Marseille and a narrow 14–9 victory over the host nation France carried England to a second successive final appearance. The final was played in Paris on 20 October against South Africa, who won by 15 points to 6.
In 2011, England reached the quarter final stage, losing 19–12 to France.
In 2015, England became the first sole host nation to fail to qualify for the knockout stage, exiting the pool stage after losses to Wales and Australia.
England's Jonny Wilkinson is the highest points scorer in the rugby world cup, having scored 277 points between 1999 and 2011. England have the fourth most points and fourth most tries scored in the World Cup.
DISCLAIMER - RUGBY LEAGUE WORLD CUP | RUGBY WORLD CUP
XchangeTickets.com is in NOT associated with Rugby League World Cup ("RLWC"), Rugby World Cup Limited ("RWCL"), Rugby World Cup, World Rugby, Rugby Union or organizers for Rugby League World Cup or Rugby World Cup to be held in France from Sep-Oct in 2023. The term Rugby World Cup or Rugby League World Cup is used only for the purpose of properly describing certain events only and without the specific permission of RWCL or RLWC. Tickets listed on our ticket exchange platform are not affiliated with RWCL/RLWC. Ticket prices are set by sellers and can be above or below the face value.