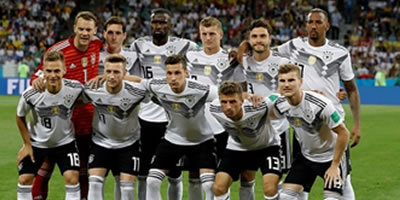 In men's international football, the German national football team represents Germany, and it played its first game in 1908. The German Football Association, which was established in 1900, is in charge of the group. Due to Allied occupation and division, three different German national teams were recognized by FIFA between 1949 and 1990: the East Germany team representing the German Democratic Republic (1952–1990), the Saarland team representing the Saar Protectorate (1950–1956), and the DFB team representing the Federal Republic of Germany (named West Germany from 1949 to 1990). The current squad symbolizes the reunited Federal Republic because the latter two were absorbed along with their records. Following reunification in 1990, the official name and code "Germany FR (FRG)" was abbreviated to "Germany (GER)".
Germany is one of the most successful national teams in international competitions, having won four World Cups (1954, 1974, 1990, 2014), three European Championships (1972, 1980, 1996), and one Confederations Cup (2017).

How do I buy Germany Football World Cup tickets?
For every game, Xchange Tickets will offer options to purchase Germany tickets. Use our live inventory to choose the number of tickets you want, the price you want to pay and the area in the stadium you want to sit. Xchange Tickets website will then give you the best and safest option from the online market. Once you purchase tickets, you will then be instantly sent confirmation and delivery details of the tickets. Many Germany Football World Cup tickets are now in the form of mobile tickets which you will be sent the details for.