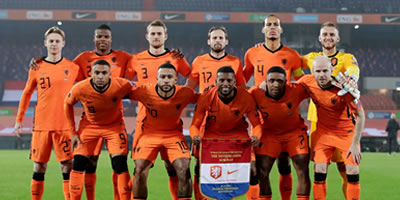 Since 1905, the Netherlands national football team has represented the country in games of men's international football. The men's national team is governed by the Royal Dutch Football Association (KNVB), which is a subset of UEFA and is governed by FIFA. The KNVB is also responsible for overseeing Dutch football. They are widely recognized as one of the greatest national teams in history as well as one of the best national teams in the world of football. The Johan Cruyff Arena is where the Netherlands play the majority of their domestic games. The Netherlands has participated in eleven FIFA World Cups and has three final appearances (in 1974, 1978 and 2010). Additionally, they have participated in twelve UEFA European Championships, taking first place in the 1988 West German competition. In 1908, 1912, and 1920, the team also took home a bronze medal from the Olympic football competition. Football rivalries between the Netherlands and its neighbours Germany and Belgium date back many years.

How do I buy Netherlands Football World Cup tickets?
For every game, Xchange Tickets will offer options to purchase Netherlands tickets. Use our live inventory to choose the number of tickets you want, the price you want to pay and the area in the stadium you want to sit. Xchange Tickets website will then give you the best and safest option from the online market. Once you purchase tickets, you will then be instantly sent confirmation and delivery details of the tickets. Many Netherlands Football World Cup tickets are now in the form of mobile tickets which you will be sent the details for.