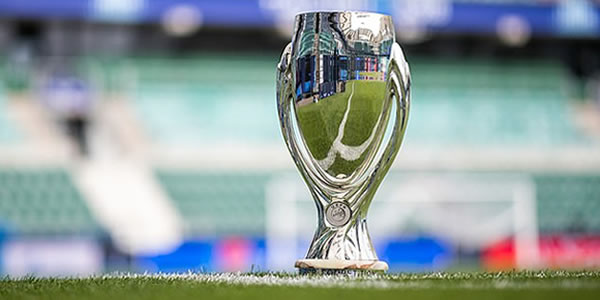 The match was originally scheduled to be played at the Estádio do Dragão in Porto, Portugal, on 12 August 2020; however, after the COVID-19 pandemic in Europe caused the postponements of the previous season's club finals, the UEFA Executive Committee chose to award the rescheduled Champions League final to Portugal, and postponed and relocated the Super Cup to Budapest.

Following discussions with its 55 member associations on 19 August 2020, the UEFA Executive Committee decided on 25 August 2020 to use the 2020 UEFA Super Cup as a pilot match for which a reduced number of spectators, up to 30% of the capacity of the stadium, can be allowed in, and it will be the first official UEFA match to have spectators since their competitions were resumed in August 2020.

The Estádio do Dragão was scheduled to stage its first ever UEFA Super Cup match. It had hosted the UEFA Euro 2004 and the 2019 UEFA Nations League Final. The city of Porto and Portugal as a whole, however, had seen one Super Cup match before in 1987, as the now-demolished Estádio das Antas hosted the second leg.

This is scheduled to be the first UEFA club competition final hosted at the Puskás Aréna and the second for Budapest and Hungary, having hosted the 2019 UEFA Women's Champions League Final at the Groupama Arena. Prior to the relocation, the stadium has been selected as one of the hosts for the UEFA Euro 2020 as well as hosting the 2022 UEFA Europa League Final, before being rescheduled to 2023.